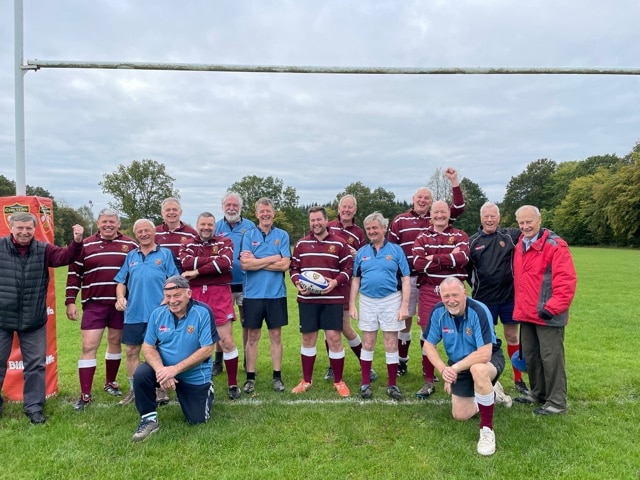 THE VETS FROLIC YET AGAIN…….

Sadly Chris our MD had to miss the Vets match this time due to injury but victory was glorious.

As the ages rise so the numbers drop…nevertheless 16 intrepid players, a referee and umpteen hangers on, met again on Vets Day as a prelude to a delicious lunch and the splendid annihilation of Chingford by the 1st XV.

The morning get together before Vets day has been going on longer than most people can remember although I am pretty sure this was at least the 20th game I have refereed. When we started it was still full contact rugby albeit at a slightly slower pace than in everyone’s hey day. From that we moved onto touch rugby although that was a misnomer as it was just an excuse for certain flank forwards to continue the sneaky off the ball tackles that they had always done. After a couple of rather serious injuries it became “proper” touch rugby and for the last 12 years that is what has prevailed.

Alas even that is now beyond the wind and legs of most, so this year we ventured forth into the world of “WALKING RUGBY”!!

The players were shown the rules of this ever increasingly popular game but as usual the players just did what they wanted which resulted in 1 red and 1 yellow card…….

The size of the pitch changed regularly as the dexterity of the players and their passing ability improved and the Reds deservedly won the day by 7 tries to 3.

Mike Neal and Eric PB handled the smelling salts and bandages with their usual aplomb and the only negatives were the absence of old friends, sadly no longer with us, and the usual 2 organisers, Peter Williams and Ross Thomson who were both sadly indisposed on Saturday. Ross has been rather poorly so we wish him a speedy recovery but Willie, despite umpteen vaccinations somehow managed to go down with Covid following an alcohol fuelled golf trip to sunny Spain….We missed you PW. Dave Crimp had put his back out playing golf and Richard Keen was heard muttering about a new shoulder that he had been given, well hopefully next year…

Seriously, as we gradually get back to greater normality over the coming months it would be really good to see if we can drum up more numbers next year when some greater clarity regarding the rules will be made available well before kick off!!!

As always it was however great fun and so good to see so many stalwarts of Chiltern back again at the club.

If you would like to find out more about Amersham and Chiltern RFU please click here: https://www.chilternrugby.com/